Chinese Association of Political Science had held their 24th annual conference titled “The International Political Economic Change and Challenge to Democratic Governance” on November 8th and 9th in 2014. This conference took a synthetic approach on the cross-field studies on theories, politics, economics and sociology to discuss the development of international politics and economics as well as the challenges to democratic governance for most nations. We expected to provide substantial amount of research for the studies of Taiwan’s political science and other related knowledge groups as well as a platform for scholarly interchanges.

We had invited Taiwan’s Vice-president Den-yih Wu to give a speech for our conference. Dr. Paul Collins – the emeritus professor in University of Nottingham in United Kingdom is our special guest who also gave keynote speech for our opening day.

In the beginning, Vice-president Wu had showed his great support for our conference and he focused on the topic “The International Political Economic Change and Challenge to Democratic Governance” to give a lecture. Wu mentioned that this is the time of globalization, and at present there are three major economic domains in the world: European Union, North America Free Trade Area and Asian Pacific Economic Cooperation. These three economic domains have played the crucial roles in the changing period of international politics and economics as the issues of economy and security have surpassed the political and military concerns and become the dominant trend of our times. This inevitably leads to the unilateral or multi-lateral collaboration in the economic trades between nations as the obstacles of custom duties have been eradicated to accelerate the flows of global economy. However, there are still many problems when it comes to the actual practice of global governance, particularly various technological innovations. On the one hand, this has facilitated the societal modernization. On the other hand, this has also provoked the risk of uncertainty.

At last, Vice-president Wu brought out the prospect of “good-willed governance” and he reaffirmed his idea by quoting the passage of “great unity” of “Li-yun” in the traditional Chinese Confucian classic as he wished to encourage the participants of this conference to modernize our traditional values and apply them to the contemporary society. Wu thinks that best future of the world relies upon the elites who cooperate on the issues concerning globalization with good sense of communication. This shall be the essence of democratic governance as well as the ultimate ideal goal for the capable statesmen in the world.

Chinese Association of Political Science had invited Emeritus Professor Paul Collins from University of Nottingham in UK to give a keynote English-speaking speech at the conference-opening. The topic of Dr. Collins’ keynote speech is “The International Political Economy：Challenges to Democratic Governance” to resonate the title of this conference.

In Dr. Collins’ keynote speech, Dr. Collins indicates the significance of political economics and democratic governance. Collins starts by redefining the concept of democracy, which gradually catalyzes the leak holes over the borders between nations. The issues of leakage might cause crisis between dominant nations and less dominant nations. Furthermore, the blurring of boundaries in the global society also brings forth more challenges to our general safety. From the perspective of history, Collins urges the International Monetary Fund to help to solve the problem in Greek economy. At present, Collins asserts that we need to have some vision over and put our trusts in our people and our leaders so they can thoroughly practice the idea of democratic governance. Through expansive participation and the reaffirmation of our civil rights, democratic governance can surely stimulate positive progress in our nation as well as our society. 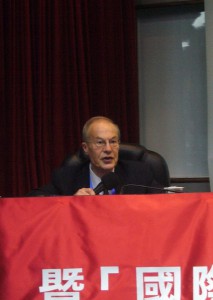 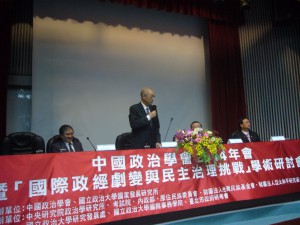 Vice-president Wu gave a speech at the opening 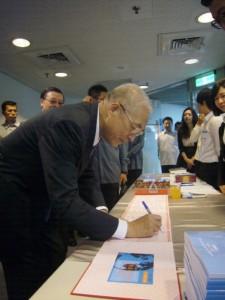 The Annual International Academic Conference of Chinese Association of Political...